At 31 years old, César Rivera is one of the youngest oenologists in Castilla-La Mancha with a talent for making wine that make people fall in love with. Cesar started out selling wine machinery, and along the way figured out that he was actually quite good at making wine. In 2013 he took on the challenge for making the first wines for Bodegas Reconquista.

Reconquista was founded on an abandoned, run down winery and was rebuilt into the winery that stands today – their reconquest. The winery strives to innovate and create ground breaking mixtures to make them delicious on the palate. Their passion is within the research and development, dedicating a department entirely to the discovery of new aromas and textures that translate into pleasant experiences and sensations. The winery believes that innovation does not have to be at odds with tradition and bring the two together by using traditional barrels and practices with sophisticated machinery and modern processes.

At Reconquista, they long to define themselves as enhancers of experiences. They believe that the greatest attraction of their small winery is the selective and very careful process that characterizes their wines, which are always round on the palate. Their philosophy is that they do not only make wine, but they also intend to create states of well-being though their range, where all the values of the legacy that has inspired their first steps are materialized. They look for another way to catalyse moods, always ending in a smile.

The very unique label represents a vineyard, which is represented with its floral composition with acanthus leaves and grape clusters. The winery is represented as a reference to the popular, gothic-style architecture of Ciudad Real, their hometown, finishing off the logo as a crown inspired by the Plaza Mayor. The label is also divided into two sections: the upper one is identified with their red grape varieties and the lower one, which is smaller, represents the white grape varieties, separated by a V for the word ‘vino’ while also drawing an arrow that symbolizes the progress and direction of their own “reconquest” of the wine world.

Historically, the Reconquista was a centuries-long series of battles by Christian states to conquer the territories of the Iberian Peninsula (Spain and Portugal) ruled by the Muslims. In the 11th and 12th centuries, the Order of Calatrava (meaning castle in Arabic) was one of four military-religious orders, which involved crusades and reconquests of territories from the Muslims, both in the Holy Land and in Spain. In much of Europe, these groups died out fairly quickly after the end of the crusades to the Middle East, however in Spain their remnants and cultural associations live on.  The Cross of Calatrava is at the heart of the label, alluding to the geographical location of the winery. It is also worth highlighting the importance of the number 4 at a compositional and symbolic level in reference, in the four towers at the top, four bunches of grapes, and four arms to the cross, mainly to the passing of the seasons that mark the life of the vineyard.

Nose: Intense red and black fruits, supported by the toast and smoke of French oak. 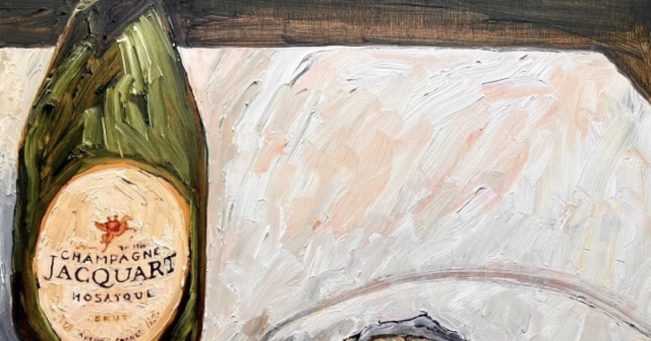 January: In The Media

Christmas Is Golden And So Is H...

If You Go To Calatayud, Ask For...